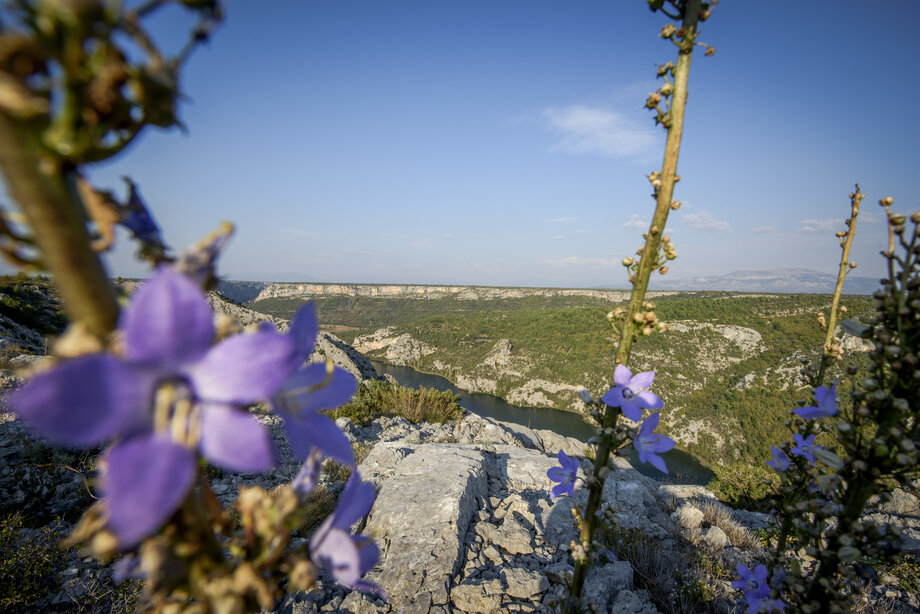 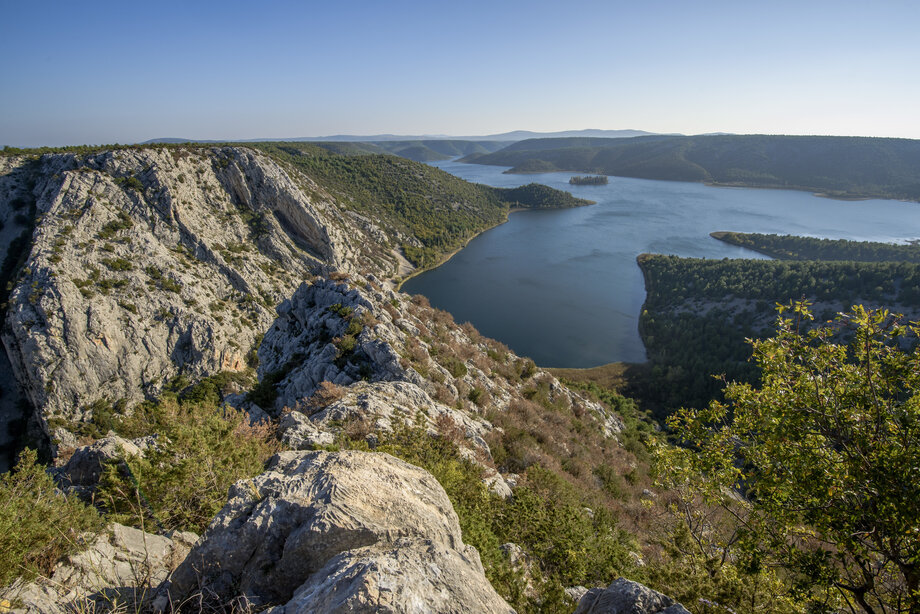 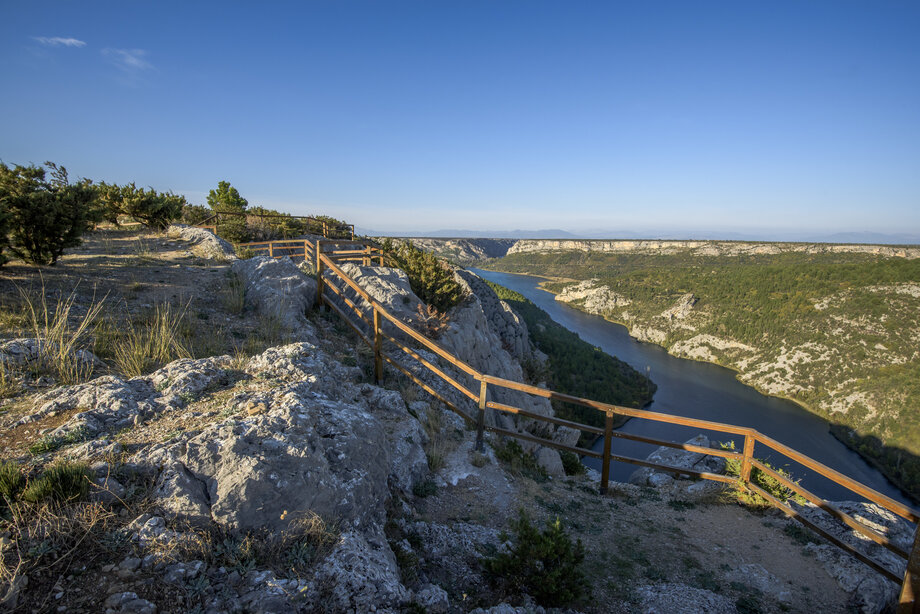 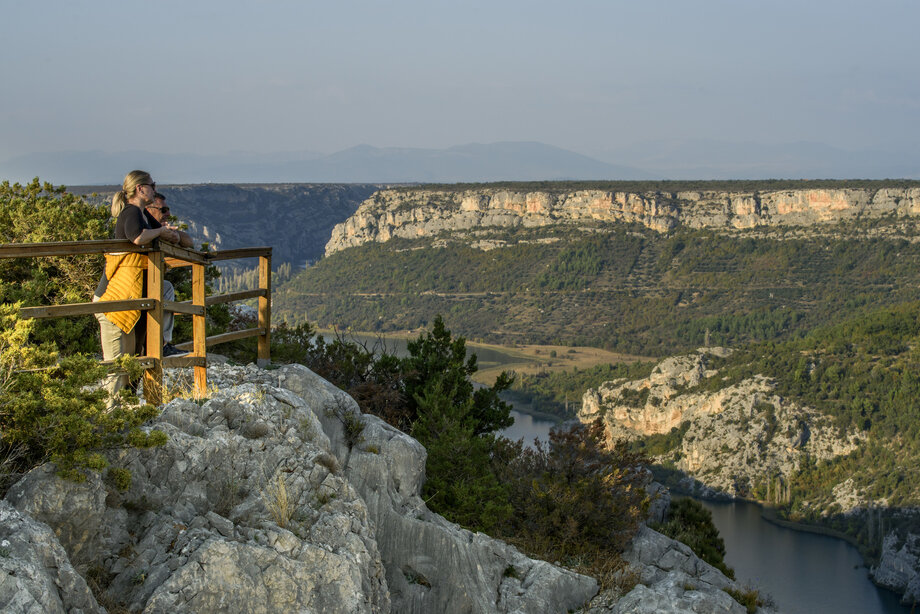 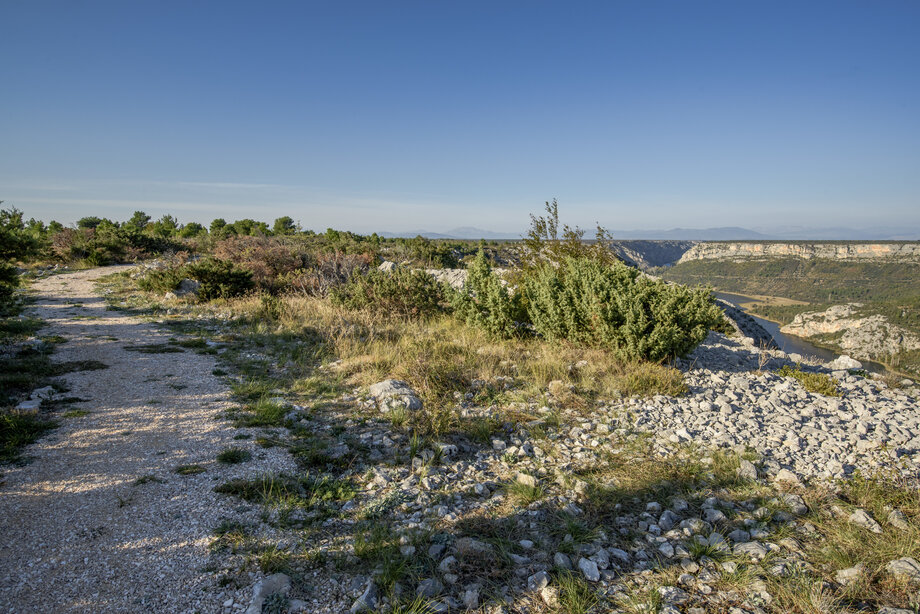 A view from the tip of the Rogovo horn over the emerald and blue waters of the strait
As in life, so on the Krka River, the view of the same scene from different perspectives brings a completely different experience. Krka National Park abounds in such views. In travelling along the left or right bank, vistas of the Krka open up, and are always new and interesting, precisely because of this shift in perspective – as you stand by one feature, viewing another across the canyon. It is not wise to argue that your sea is the most beautiful if you haven’t seen any others, though it can certainly be said that the Među Gredama canyon is among the loveliest sights in the national park. This canyon, cut into the grey cliffs and expanding gently into the vast lake where Visovac Island rests, is perhaps best viewed at the end of the Rogovo trail. Though there are no longer any visible traces, once long ago the Early Croatian fortress Rogovo (also called Rog and Babin grad) stood here in the area between the village of Rupe and the upper part of Lake Visovac, on the right bank of the river, just opposite the Šuplja Stina cave and the Kamičak fortress. Roški slap waterfall was also named after this fortress.
A walking trail leads through a gentle wood to the viewing point, and is ideal for a light afternoon walk to spend some of your lunch calories. After a narrow and steep earthen passage, you will reach the tip of the “horn”, from which the vista expands over the emerald and blue waters of the strait, over which the powerful eagles once soared above the fortress owned by the noble Šubić Bribirski family. And while the Krka on the one side is compressed between these tall cliffs, on the other, it opens and expands into the tranquil waters of Visovac Lake, where the Franciscan monks have been living in peace and prayer in the shade of the poplar trees on Visovac Island for eight centuries.
In spring and summer, you can explore these waters from waterfall to waterfall in the Krka National Park boats. They are protected by St. Nicholas, patron saint of seafarers, to whom the votive chapel on the left bank of the Među Gredama canyon has been consecrated. A little further down on the same bank of the Krka River, in the middle of the canyon, is a small fault in the rock that turns every sound into a triple echo, a delightful play of nature. Because of its exceptional geomorphological structure, the Među Gredama strait was chosen as the site for the films about the most popular Indian chief, Winnetou. All these can be seen and imagined by the observer standing at the tip of the horn of Rogovo.