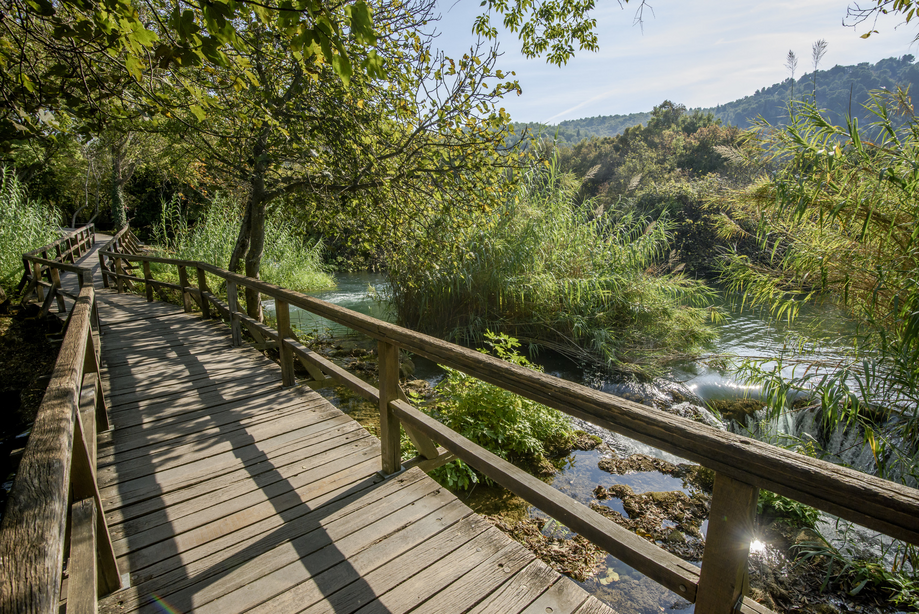 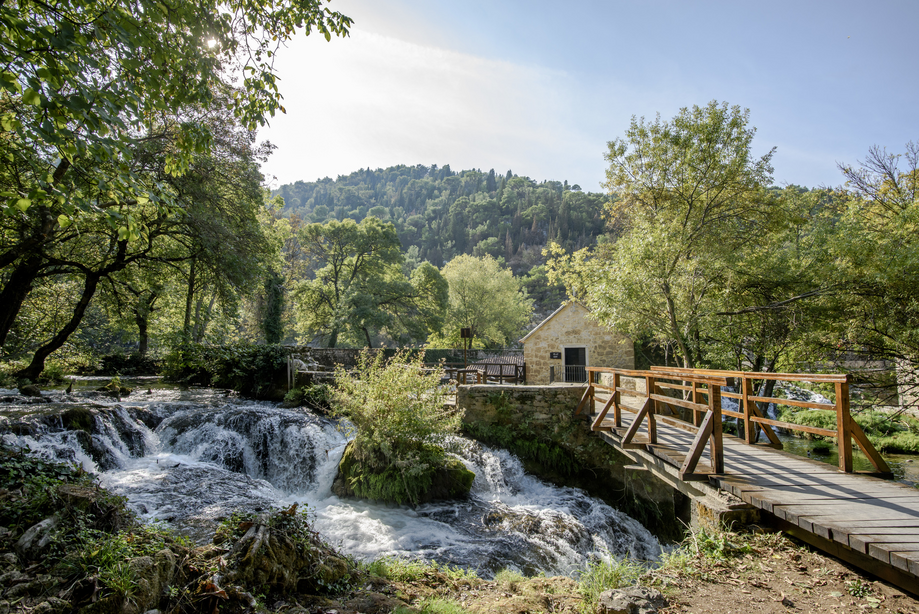 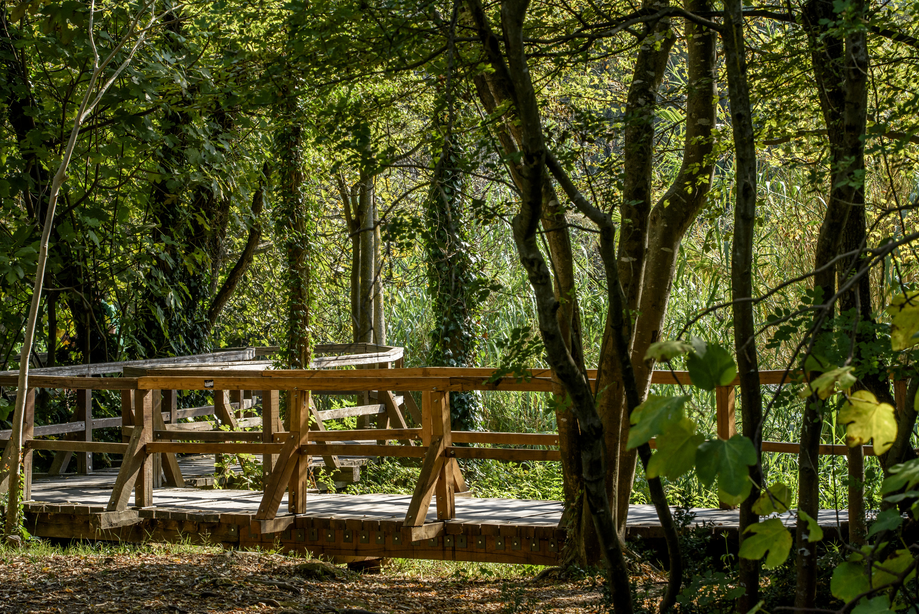 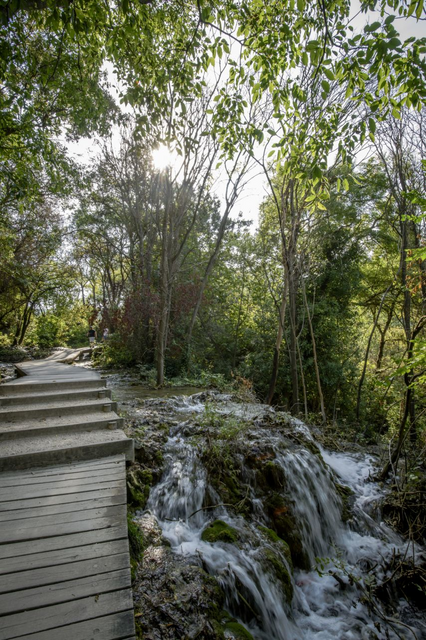 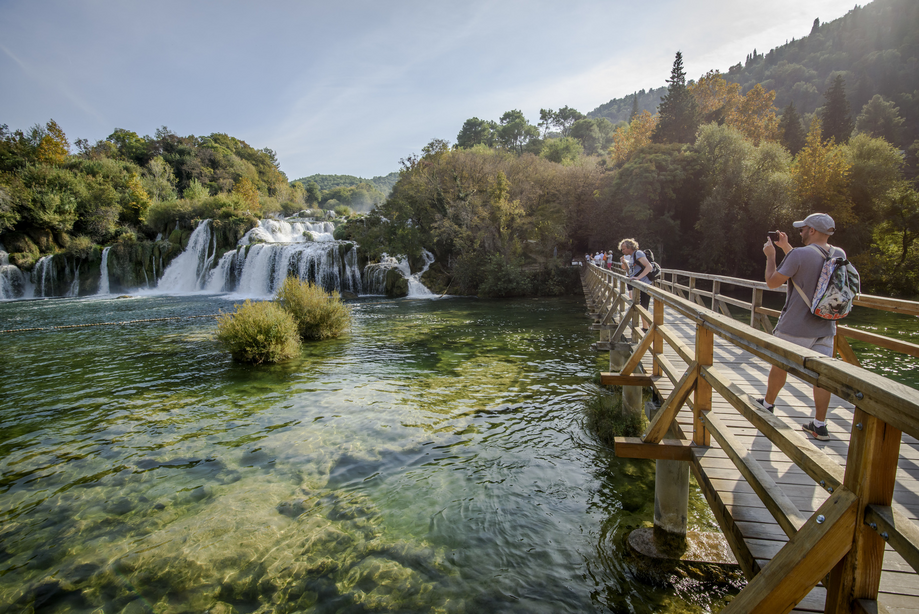 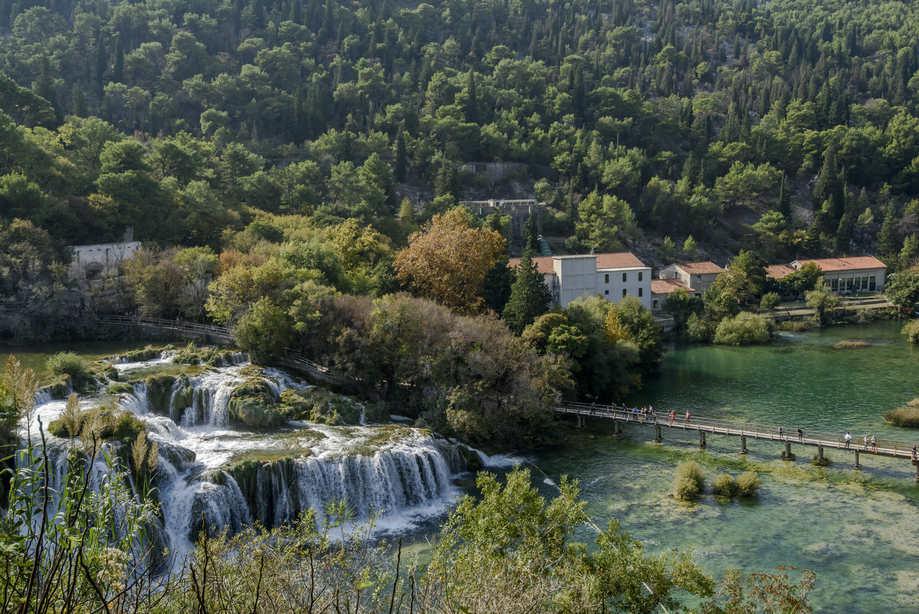 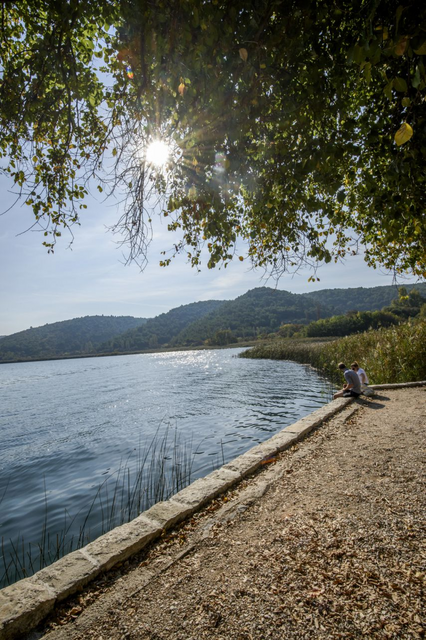 Discover magnificent views with every step
Skradinski buk waterfall is the longest, best known and most visited waterfall on the Krka River. It is formed by travertine barriers, islands and lakes. The waterfall can be viewed thanks to an extensive network of trails and bridges pass by the many watermills, including the ethnography collection that tells the tale of the economic history of Šibenik and the region. Most of the watermills have been restored and today serve to demonstrate the old crafts, and as hospitality establishments.This would be a summarised description of the trail that wanders through this waterfall area. Though this is where the greatest numbers of visitors rush to see the magnificent waterfall, those who take their time and stroll the path with their soul open to nature will spot something beautiful on each of the 2 195 steps it takes to cover the trail. So, let’s go!
The trail runs over the living water. We walk over the wooden bridge as the coot splashes on the water’s surface, while the Illyrian chub swims underneath. Green surrounds everything. The croak of the European frog is heard. The beautiful demoiselle and banded demoiselle – dragonflies – flutter as lively flying fairies. The quick eye will catch the sudden movements of the grass snake, or the dive of the dice snake. For all those wanting to know more, there are educational panels installed along the entire length of the trail.
The trail viewing point on the right bank of the river is the best spot to see the creator of the waterfalls, the fundamental phenomenon of Krka National Park – travertine. Travertine, or tufa, is a common appearance in the surface watercourses of the Dinaric karst, though it rarely builds waterfalls like those on the Krka River. If you come in summer, you will see the travertine barriers covered in green moss. If your travels bring you here in winter, you will see the white waves of the water, as though the cumulus clouds have descended from the sky. “At the falls, there are thousands and millions of tiny droplets, blowing like the mist, white as though a translucent fairy veil, sprinkling colourful rainbows on the sun’s rays. Between the cascades, you admire the dark green water, smooth as a mirror on its surface, preparing to formally, white as snow, descend down the cascades as altars” (Krsto Stošić, Rijeka Krka sa 54 slike [The Krka River in 54 pictures], 1927).
The wooden bridge is the place where man is closest to the waterfall. The bridge is strong and the soul quivers from the view over the beauty and power of nature. The combined waters of the Krka and Čikola Rivers spill together over the 17 steps of Skradinski buk waterfall, spread over a length of 800 metres. The waterfall is 200 to 400 metres wide, with a total elevation difference of 45.7 metres. Most of the foam that you can see under the falls on Skradinski buk waterfall is, in fact, natural soap.
Skradinski buk waterfall is a place of famous historical and rich cultural and historical heritage. On the trail, you can see the remnants of the Krka Hydroelectric Plant, the world’s first hydropower plant to power a city – Šibenik. The imperial viewpoint on the left point is the site where Austro-Hungarian Emperor Franz Joseph I and his wife Elizabeth stopped to admire Skradinski buk waterfall. The watermills on Skradinski buk waterfall are a preindustrial complex that once milled wheat for the whole of Dalmatia. The Dalmatian chrysanthemum is a plant that was milled at the mills of the Šupuk family at Skradinski buk waterfall, and it was used as an insecticide during the digging of the Panama Canal. In the restored ethno-village, you will meet the miller, blacksmith and weaver, all in their folk costumes, who will present these old crafts with much knowledge and love.