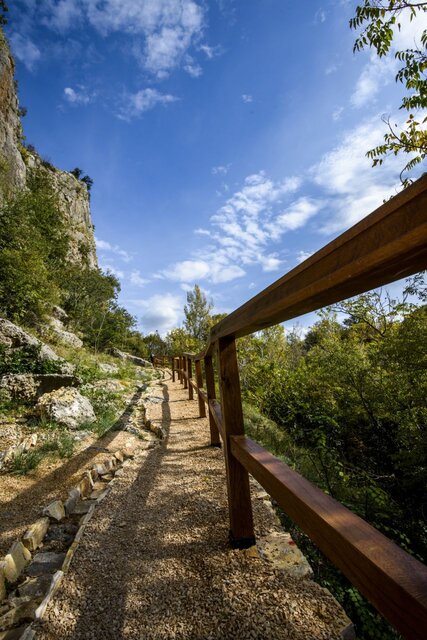 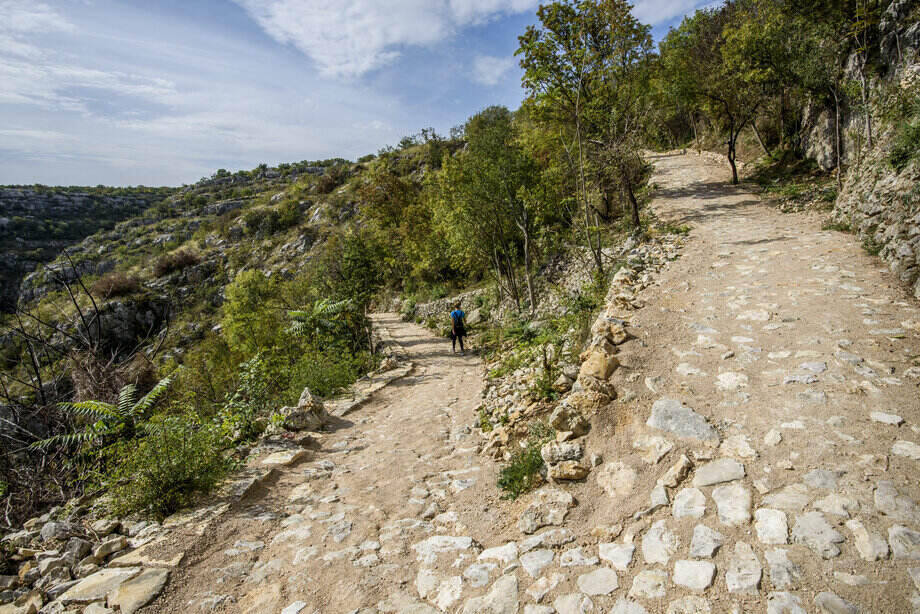 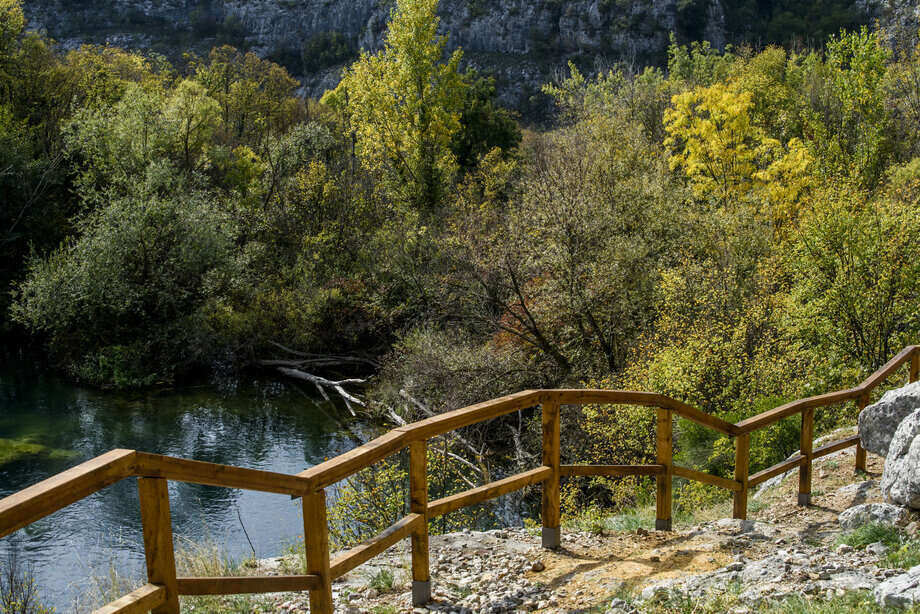 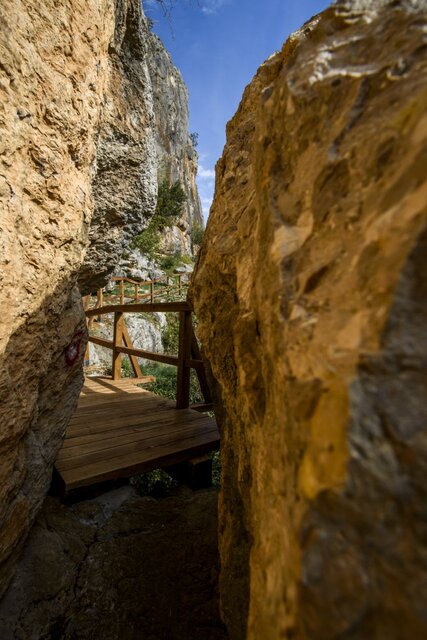 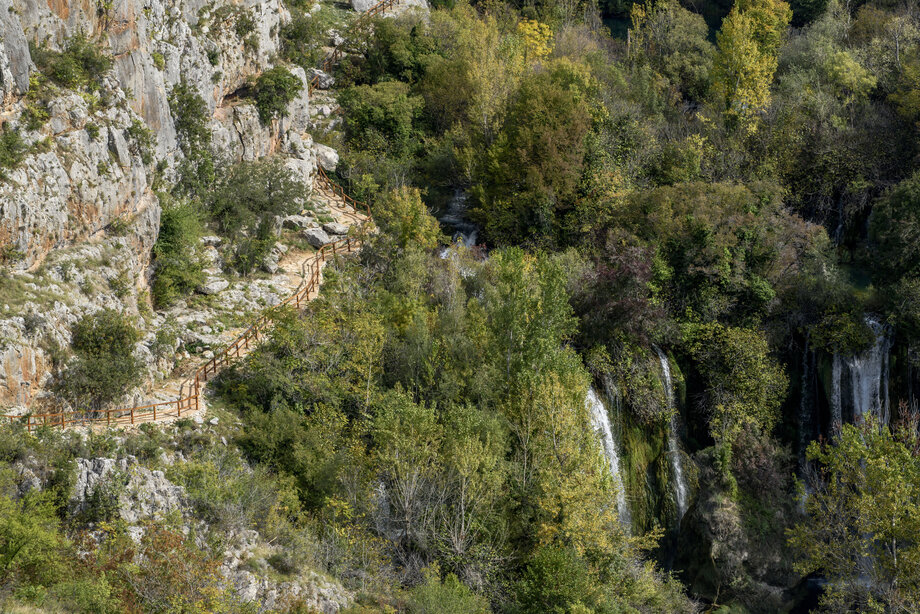 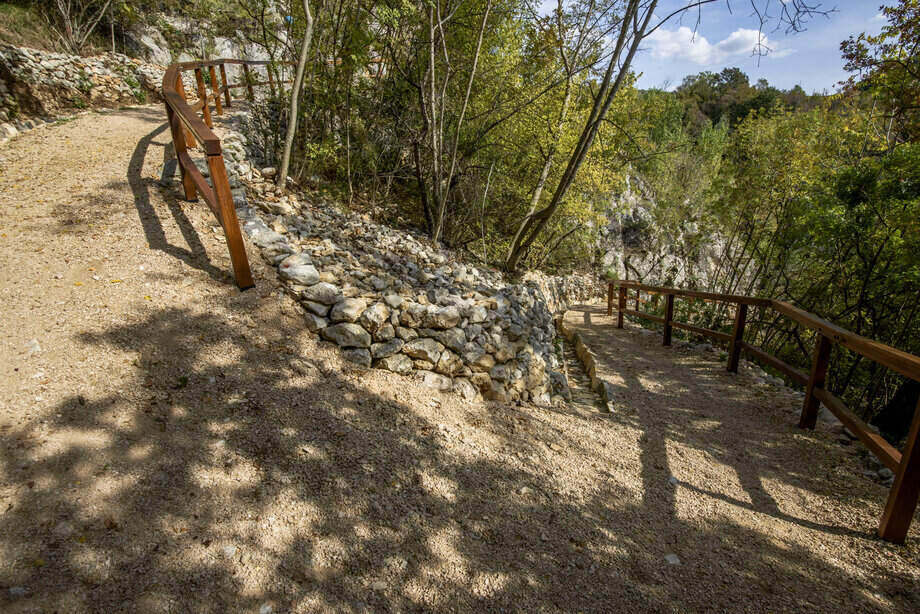 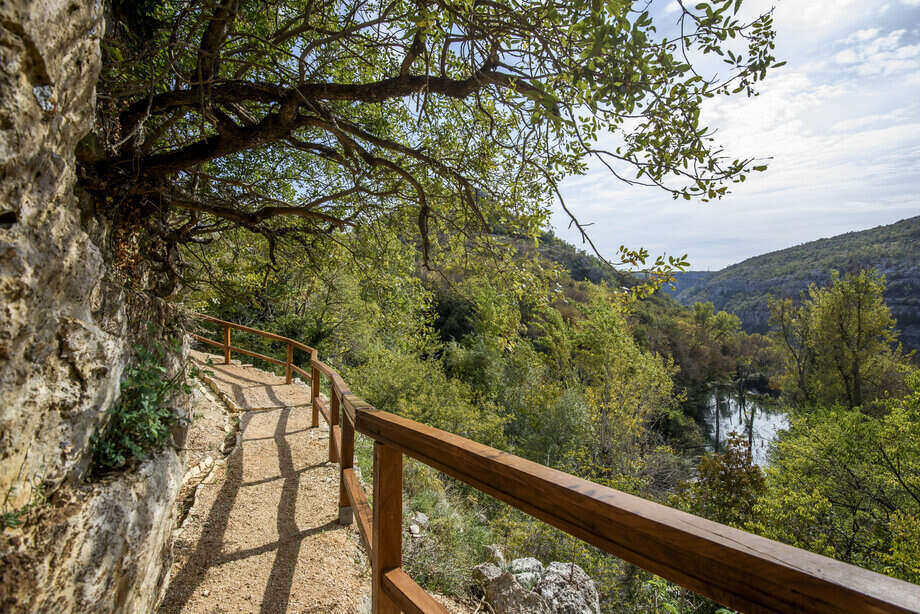 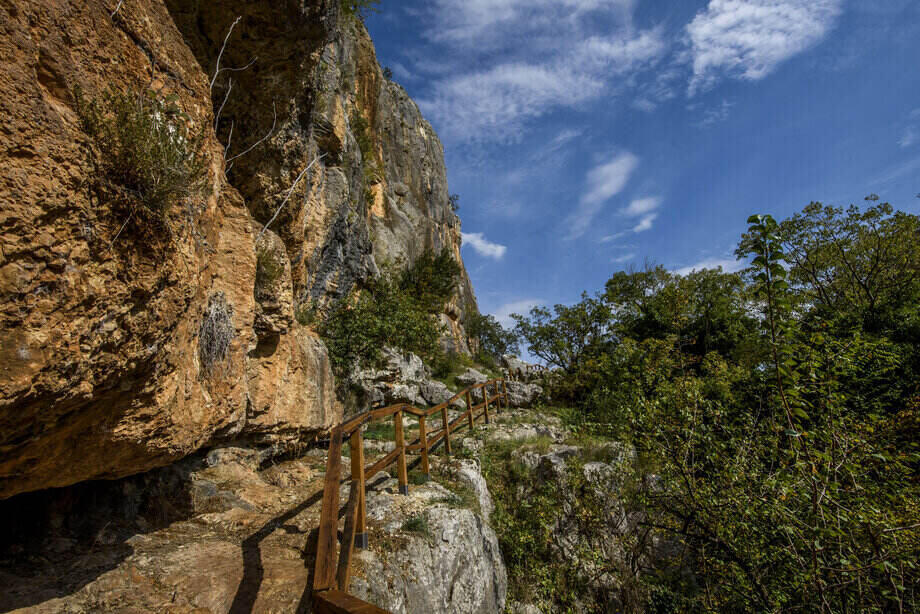 The paths of the Illyrian tribes and ancient Romans to the hidden preindustrial watermills
Once you have had the chance to enjoy the view of the Manojlovac waterfall from the Imperial viewpoint, then head down the steep trail down the canyon to the watermills. After being silenced by time, these mills became hidden in the dense vegetation. All around the water, green everywhere, dewy moss and lichens, ivy climbing high, and the ferns that hangs down from the cliff. There is the dark green maple, the leafy fig, the weeping willow, the silvery trembling aspen and the slender fir. The water is first deep blue as in the deep lakes, flowing beneath the proud slopes and the dark cliffs, peeking out behind the ridge, lapping on the green islets, the dense shrubs, skipping over small barriers and chastely in white descends down the wide step. From this description in his travelogue of the Krka River from 1927, it would appear that don Krsto Stošić was strongly impressed by the Krka’s tallest waterfall.
Even today, the experience is powerful. The canyon surrounding the waterfall is overgrown in sub-Mediterranean vegetation, while all around the fall, in the wet and shady places and in the half-caves, we find the Southern maidenhair fern (Adiantum capillus veneris). This is a rare fern species, a Tertiary relict of tropic origin. In the mythology, this maidenhair fern is associated with beauty and love. In Christianity, it is one of the many plants named after the Mother of God. In the folk medicine, the leaves have been used for centuries for treating diseases of the respiratory system and urinary tract. Southern maidenhair fern is also listed as a rare species in the Red Book of Plants of the Republic of Croatia.
As you descend nearer to the water and admire the vegetation, take note that you are treading down the ancient paths of the Illyrian tribes and Roman soldiers. This trail has been used continuously since prehistoric times, when the Illyrian gradina (hill fort) stood at Puljane, on the left bank of the Krka River, and it was connected by paths not only to the eastern lands that it overlooked, but also with the western lands on the right bank of the river. The logical passage over the river was above Manojlovac waterfall. In the ancient period, this route was even more important. Since the Romans were excellent road builders, they built this road up so well that it became one of the most important communication routes between the left and right banks of the Krka River, and also between the Roman military camp at Burnum and the prehistoric gradina that continued to live and thrive well into the ancient era. They were connected by a wooden bridge, and its remnants have been found on the river bottom at one part of the Manojlovac waterfall. Many centuries later, this route was again important as the local population used it to reach the watermills and clothes washing columns. The sound of grinding wheat was a regular feature here until about 1965, when the final watermill was closed down, leaving the path to become overgrown, and no longer could you hear the sound of the mill, or of footsteps, just the sound of the water crashing down in the distance.