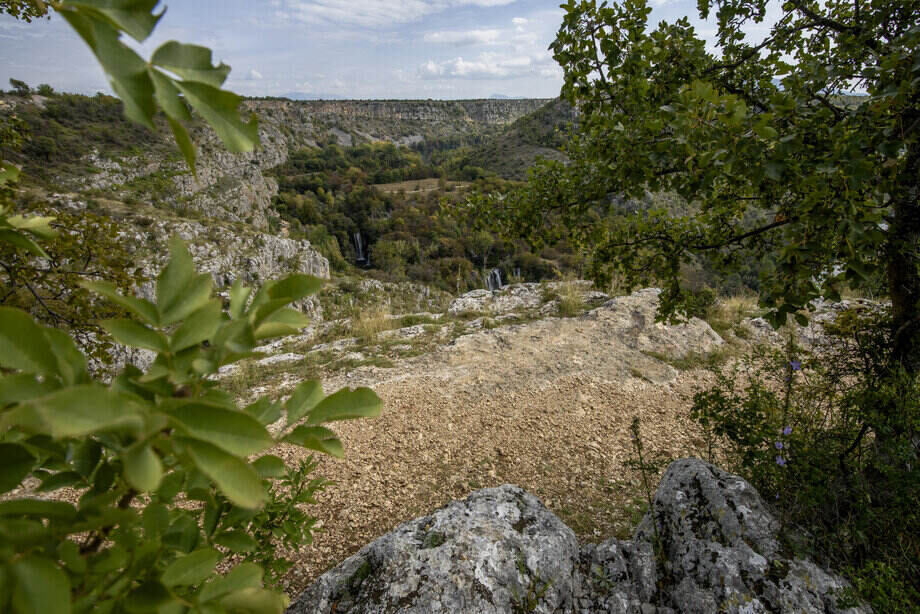 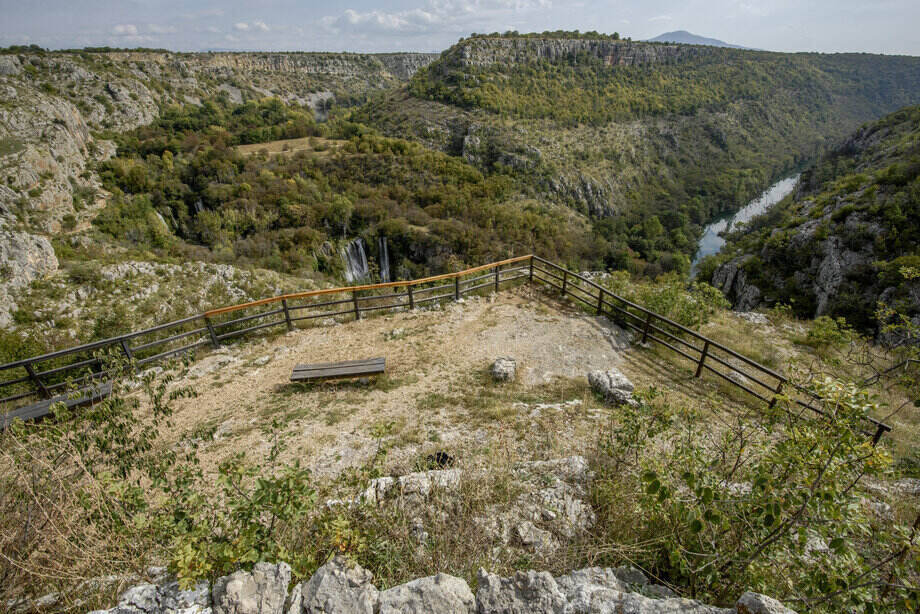 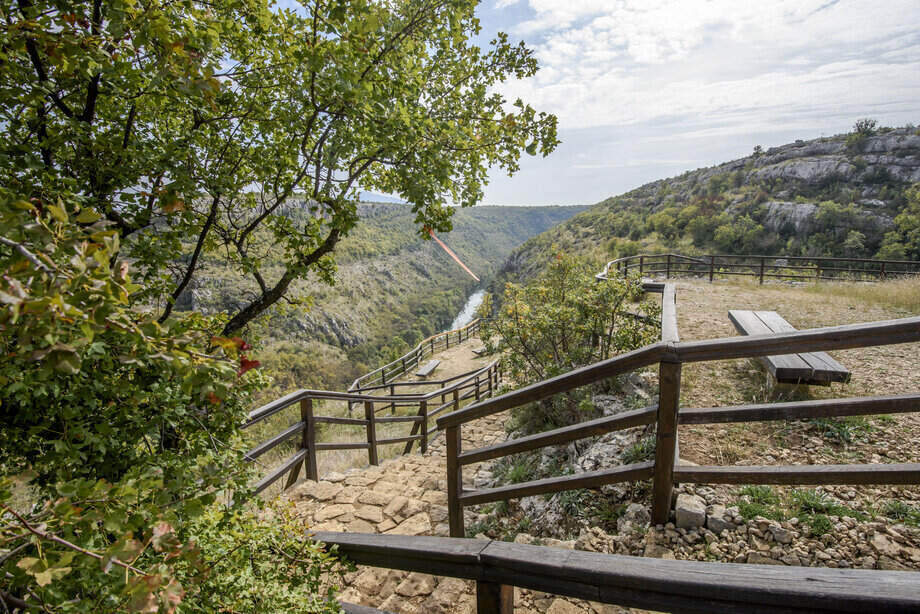 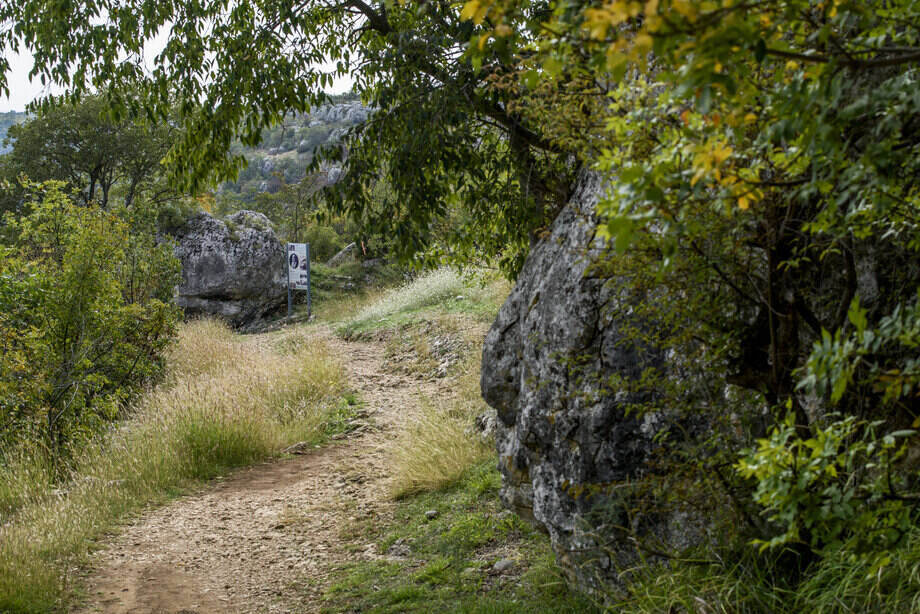 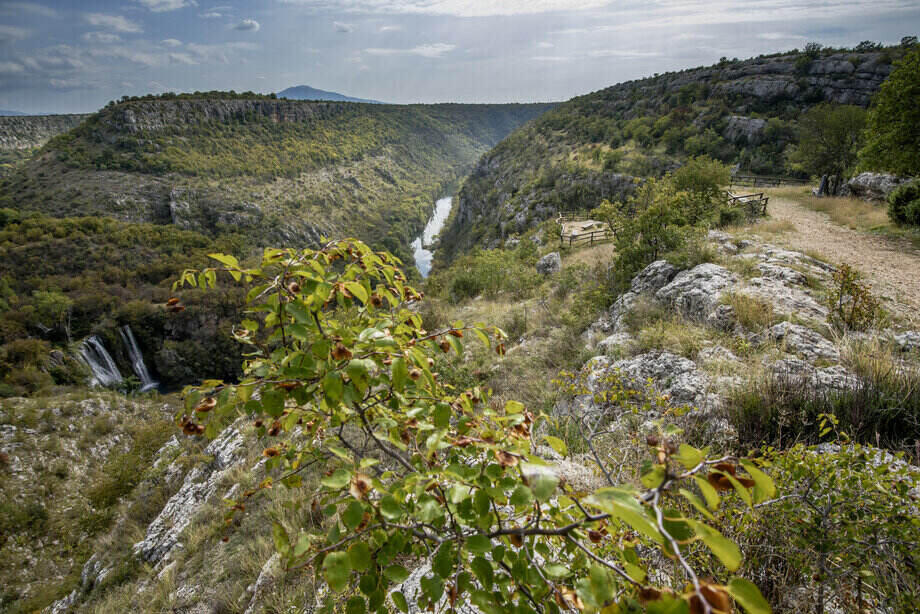 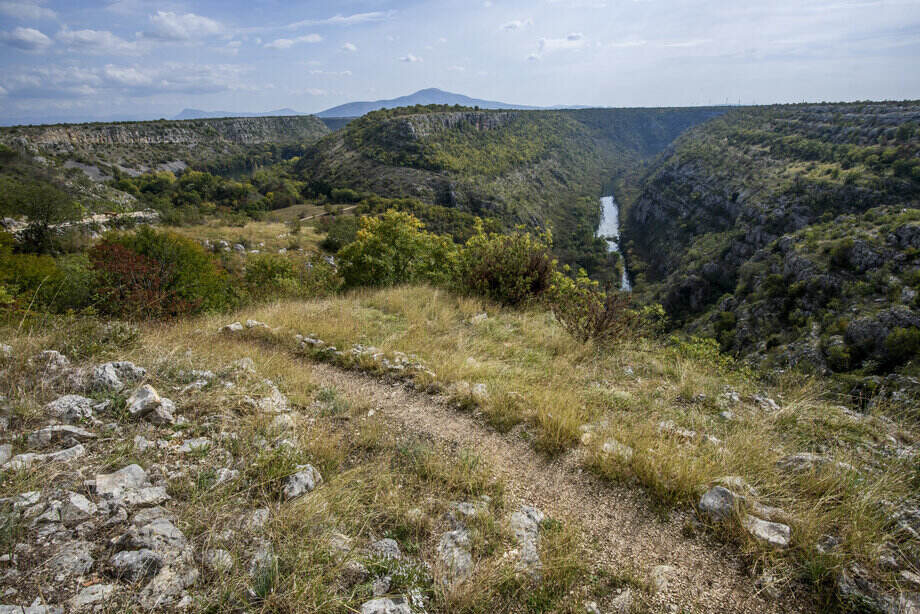 A region imbued with history, where the Krka’s tallest waterfall crashes down
There where the Krka makes a 180° bend is where we find the Manojlovac fall. The water that has cut into the limestone karst first formed a plateau, then cut deep into it to form a canyon. The waterfalls were created last, as the youngest forms in the canyon. This makes the Krka River an area of opposites: the barrenness of karst and the lushness of the water rushing through it. This is particularly prominent in the upper course, between ancient Bukovica and famed Promina, with five waterfalls, a lake and rapids in a span of just 4 kilometres. The Krka here has forever been together with humans, and today this area is rich in valuable archaeological sites and the long history of the Illyrian tribes and ancient Romans, who conquered these lands and erected their military camp Burnum here.
It was 144 years ago that the Austrian Emperor and Croato-Hungarian and Czech King Franz Joseph I and his wife Elizabeth of Bavaria admired the Manojlovac waterfall during their tour of Dalmatia. In commemoration of the imperial visit, in 2011 the restored monument plaque was opened on the trail towards the viewpoint, overlooking the waterfall. The plaque, bearing the likeness of the emperor and accompanying text was installed on the rock popularly called the Emperor’s Head in 1899 by Joso Modrić as a gift to the residents of Kistanje. At that time, a grand festivity was organised with photographs to prove it. Unfortunately, there were no photographs of the emperor’s visit. Since the original plaque was destroyed, a replica with the image of Emperor Franz Joseph and Empress Elizabeth was created, and the stone slab upon which it was installed has been restored. Under the bronze figure of the emperor is the inscription: “His majesty Emperor and King Franz Joseph I passed here and looked over Manojlovac”. The emperor and empress were greeted by the residents of Kistanje, led by the head of the municipality Janković, and an imperial lunch was prepared in their honour. In the press of the day there are interesting descriptions of the imperial visit. The local population greeted Franz Joseph I in their ceremonial clothing, with the sounds of folk music and song and dance in honour of the ruler who, despite a series of agrarian reforms, was popular amongst the people. However, his wife Empress Elizabeth was admired even more, and the local women from Kistanje gave her the gift of a hundred of the finest embroidered handkerchiefs, a mandatory fashion accessory in the day. As a part of the tour, the Emperor and Empress visited Skradin, Skradinski buk and Šibenik.
Next to the Emperor’s Head rock is the first viewpoint at the end of a short trail. The second level is separated by stairs. From here there is the loveliest view of the third, the tallest and according to many, the loveliest waterfall on the Krka River, about 500 m long, 80 to 100 m wide. It consists of a series of travertine barriers with a total height of 59.6 metres. The tallest, last barrier is found at the sharp bend in the river, when it turns from the northwest towards the southeast, falling over a distance of 32.2 metres. “A million watery drops glimmering in the rays of the sun. Countless new cascades everywhere, until their enticing water collects into a single waterfall, colossal and powerful, grand and magnificent,” was the description of this waterfall by Don Krsto Stošić in his travelogue of 1927. Indeed, the feeling of awe and inspiration overtake all those standing here in this view. This region, so imbued with history and bathed in beauty, is definitely worth a visit.