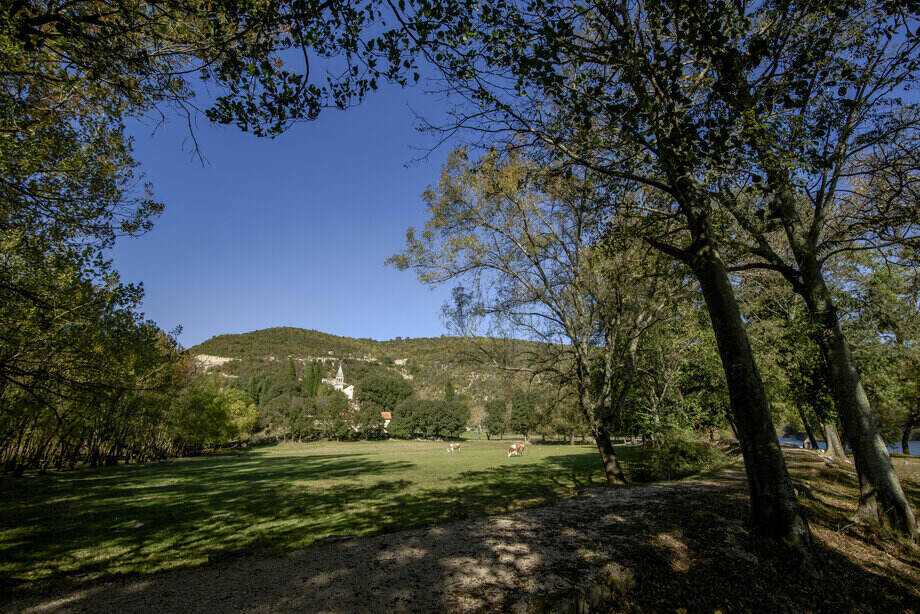 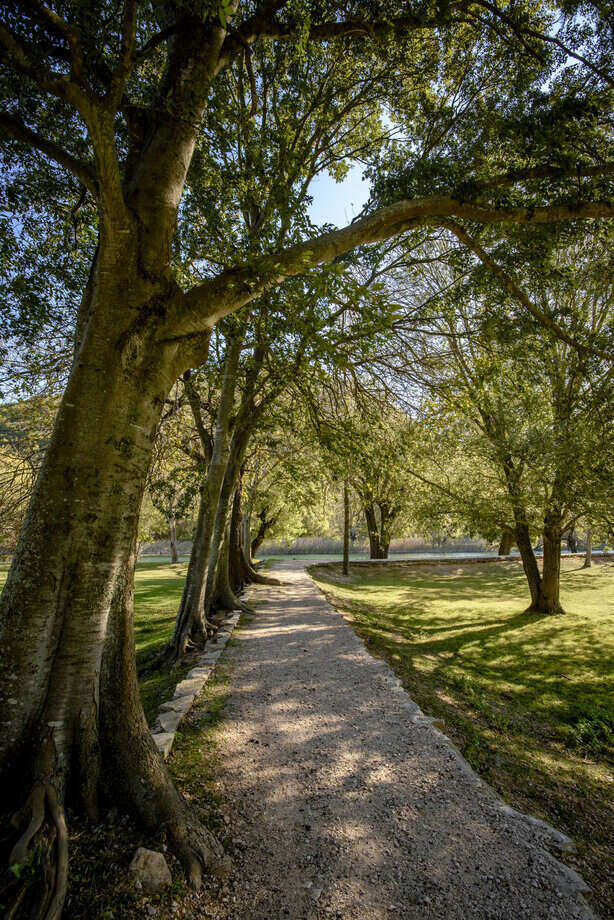 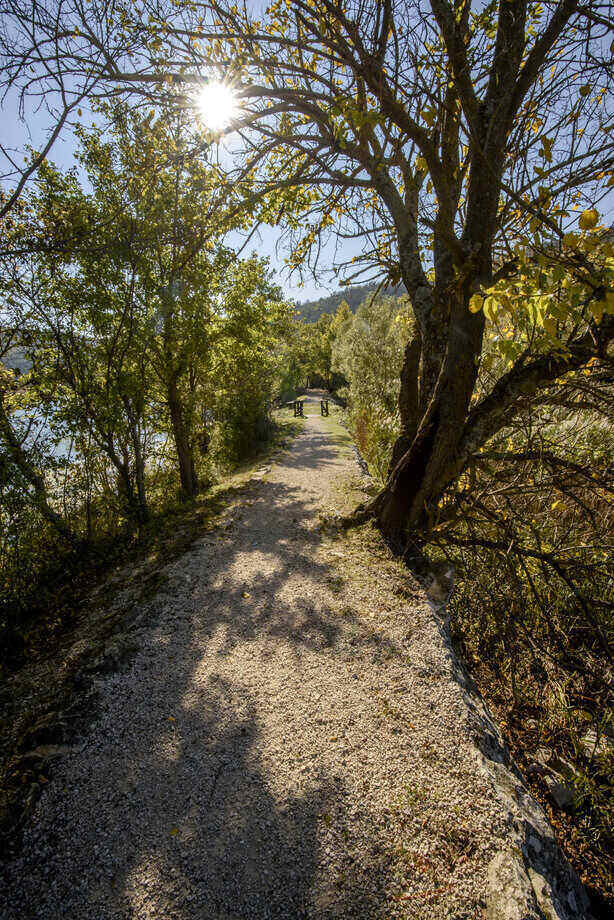 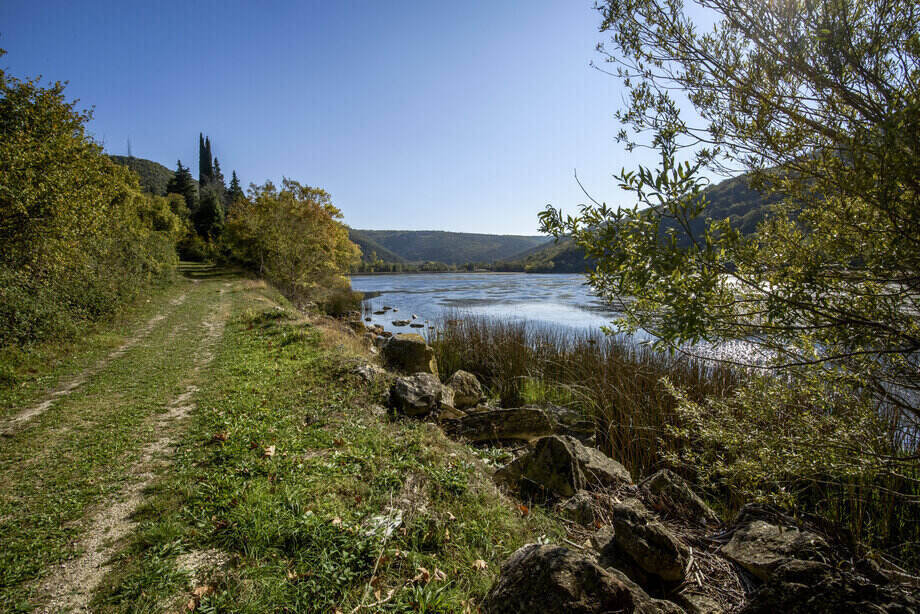 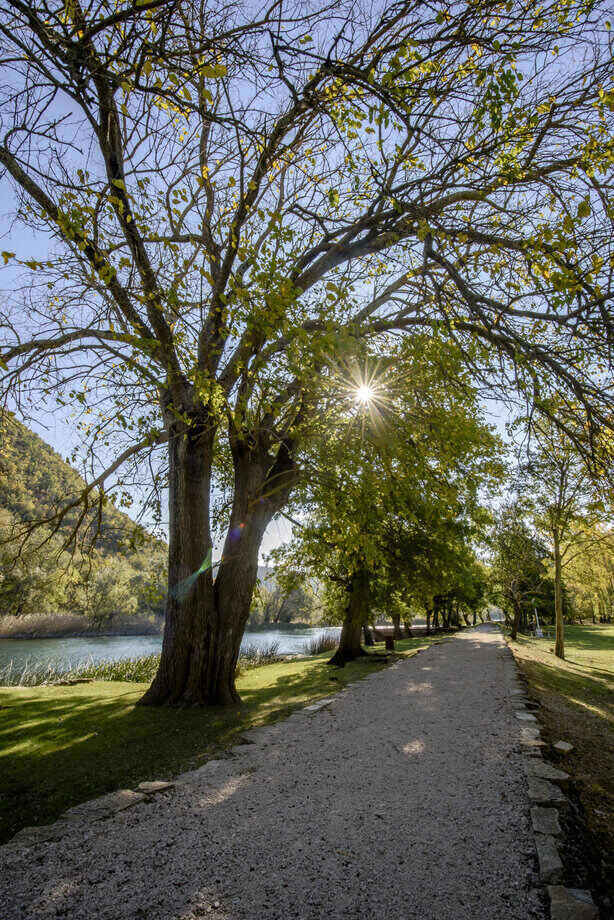 In the green surroundings and serenity of Aranđelovac, monks have been praying for centuries
Carigradska draga is the third widening of the Krka River. A plateau was formed between the steep cliffs of the canyon, where the Krka continued to flow. Lake-like wetlands exist on the right bank. The bright green water is completely peaceful and from a distance looks like a meadow. Here the silence is louder, thoughts are clearer, and the spirit is serene. Among the locals, this place is called Aranđelovac, named after the Krka monastery, the spiritual center of the Orthodox believers who settled there.
A circular path passes here, lined with hackberry trees, which provide shadows for steps, fill the air with atoms of oxygen, and paint it a soothing green. There are also lowland elms and the ash trees, which have bent their heads to touch the snowflake clouds that glitter on the smooth surface of the river. The only wave comes from a white ship, carrying in the bow a man with eyes seeking beauty. The path also includes the dock for the boats that the Krka boatmen use to carry passengers from the Roški slap waterfall to the Krka monastery, and even further to the medieval fortifications of Nečven and Trošenj. The youngest visitors will be particularly pleased by seeing the monastery horses, donkeys, and sheep that graze in the meadows along the path. This is the best possible way for children to become acquainted with animals: free, in their natural environment.
After a pleasant walk along the trail, visit the Krka monastery, the centuries-old home of Orthodox monks, erected in a place where, according to legend, the Apostle Paul had preached the faith of Christianity when, on his way to Rome, in the sixties of the 1st century, he passed through the Roman town of Burnum and stopped along the Titius (the Roman name for the Krka River). The second legend related to the monastery is linked to the Princess Jelena Šubić, the wife and widow of Prince Mladen III Šubić, and the sister of the Serbian Emperor Dušan, whose priests and confessors erected the monastery exactly at the spot where the apostle Paul had preached, being richly rewarded by Jelena. This is the story told by the local people, but in fact no reliable historical data exists for when the monastery was built. It is mentioned in written documents for the first time in 1402, referred to one of the stone inscriptions above the main entrance to the monastery. A church built in the Byzantine style is located beside the monastery, to which a bell tower was attached in 1790. Ancient Roman catacombs, open to visitors, are located beneath the church. The monastery has a large and rich library with codices, incunabula, and rare books. The monastery treasury contains valuable icons and artistic craft objects from the 15th to the 19th centuries.